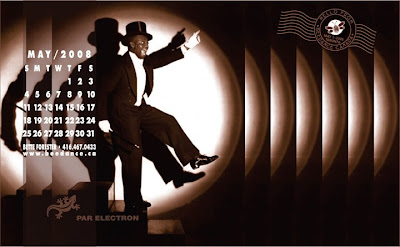 His name was Bill Robinson...
AKA Bojangles

Bill was born May 25, 1878. Orphaned as an infant, he was reared by his grandmother, Bedilia Robinson, who had been a slave, but he ran away at the age of seven to start his dancing career. No one knows how he came to be called “Bojangles” except that it appears to have been a somewhat generic nickname for vaudeville dancers. Bojangles Robinson danced in all the vaudeville halls and night clubs in the South and North. He changed the face of tap dancing forever, moving it from the buck-and-wing shuffling developed by the slaves to the lighter and crisper sounds we know today. He was already famous when he started his film career, which brought him to the whole world.

Was Bill Robinson the “Mr. Bojangles” Jerry Jeff Walker wrote his famous song about? Probably not. Instead of doing jail time (inspite of his two famous vices: ice cream and gambling), Bill Robinson donated his time selflessly to raise money for charities and lived in Harlem as the locality mayor. He died in 1949 and his funeral was the largest attended in the history of New York City. Adam Clayton Powell delivered his eulogy.

Maybe Jerry Jeff Walker didn't write about Bill Robinson, but he did find a way to link us with the universal joy and spirit that makes the Bojangles in each of us want to dance.

May 25th is now named as Tap Dance Day in honour of Bill Robinson. Get out there and do a few flaps, cramp rolls and shim sham shimmies to celebrate. I will.
Posted by Bette Forester at 6:19 PM