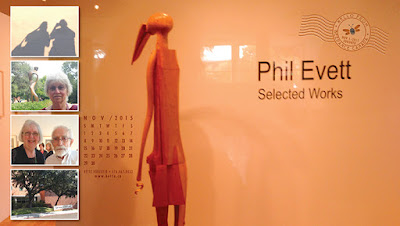 Yes, Texas. Twas my university reunion... a Big Event.Trinity University is alma mater to a slew of us still around to talk about it. It's mostly perched atop the cliff of an old quarry. From there one can see for miles around, including the San Antonio skyline. That's why it's called the Skyline Campus. That's the upper campus. The lower campus sits at the bottom of that cliff face. All beautiful and dramatic. The school itself started in 1869 and moved to its current campus in 1952 with buildings designed by now-famed architect, O'Neil Ford.

I attended the reunion with Phoebe, the woman I met during my time at Trinity. The woman you've seen on these pages before. She who now lives in Portland. She who weaves. For years Phoebe was among those who wove tapestries for Mark Adams, including these that now hang at the San Francisco airport Terminal 2. We were both sculpture majors at Trinity, under the tutelage of one Philip John Evett. The one and only. He's now retired from teaching. His current work is more vibrant than ever. Go see.

So: top pic shows Phoebe et moi as we wandered about in that 35° C (95° F) sun, Phoebe with Henry Moore (there's a Barbara Hepworth only a short walk away!), me with Evett, and lastly the now-remodelled and expanded art building where we spent so many hours drawing, painting, carving and welding all those years ago. Wandering the hallways and peering into the classroom-studios I felt the lure of The Work and memories of meeting others who also felt that lure then, too.

Evett's show here, was mounted to honour him during our reunion. Lots of us returned to stand with him again, to admire his work and just to remember. Somehow he remembered all of us.

After our reunion weekend, Phoebe and I adjourned to the gracious old Menger Hotel in downtown San Antonio, across the street from the Alamo. There we wandered the old-made-new River Walk and revisited some favourite haunts, including breakfast at Shilo's Delicatessen, a landmark for longer than even we can remember. PLUS, after all these years, I finally met Phoebe's three siblings! They joined us at the Menger and we meandered some more together and celebrated with some perfect Mexican food above the River at Mexican Manhattan.

I returned to a Don Valley that's gradually merging greens into oranges and yellows and daily adding more in preparation for just giving up and dropping everything until the light returns. I do love my Canadian seasons. Snow and ice, not so much.

Have a great Mo/November
And
Be sure to remember
To remember
On the eleventh:
Vonnegut
Et al.
His birthday
And pleas
For humanity.

AND
As former Trinity dean
Coleen Grissom reminded,
I entreat you with some
Always apropos
Kurt Vonnegut words:

I urge you to please notice when you are happy,
And exclaim or murmur or think at some point,

Posted by Bette Forester at 8:27 AM